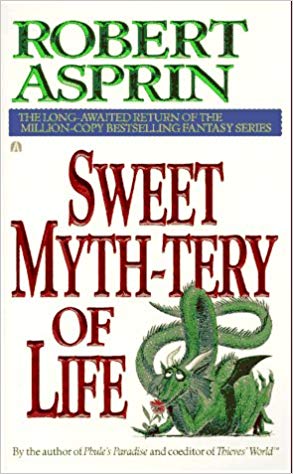 I wasn’t especially excited by prompt #22 on the 2019 Popsugar Reading Challenge, a book with a title that contains “sweet,” “bitter,” “salty,” or “spicy.” It felt like there were too many prompts that were too much like this one. However, I wanted to stick to the challenge as it is, so I chose to read Sweet Myth-tery of Life by Robert Asprin. It turned out to be the only book on my shelves that qualified for this category.

This book is #10 in the Myth Adventures series. I have not yet read the rest of the series, so once again, I took a chance jumping into the middle of a series. This is turning out to not be such a great experiment. Lesson learned, I’ll start from the beginning from now on!

In this book, master magician Skeeve is faced with a seemingly impossible decision – marry the queen, or she will resign and name him king. While deliberating on his choice, he has been tasked with reorganizing the finances of the nearly bankrupt kingdom, a thankless and uncomfortable position.

This is supposed to be a humorous romp across magical realms where trouble lurks for the unwary. And trouble comes in many forms – financial troubles, inter-dimensional troubles, romantic troubles, even dragon troubles.

I’ve heard a lot about this series, as well as Asprin’s other works. He is a favorite author among some other members of a book club I belong to. I wanted to check out his books, and I had randomly picked up a couple of them some time back. More than likely, my enjoyment of this story was hindered by having not read what came before. I didn’t know anything about these characters and their previous history. This book seemed to presume that prior knowledge existed.

I wanted to like this book more than I did. But to be honest, I was bored. And more than a little bit confused. I may one day return to this series (from the beginning!), but I’m not in any hurry to do so.

One thought on “Sweet Myth-tery of Life, by Robert Asprin: A Review”