Something happened today as I pondered the WordPress daily prompt, melody. I love music. It’s always been a part of my existence. I wondered what I might write about this word.

I’ve also been pondering the Twitter #hashtag event #WIPjoy that is going on throughout the month of September. It’s hosted by @simmeringmind, and she’s put together a prompt for every day. I’m already two days behind because September sort of snuck up on me. I’ll get caught up though! 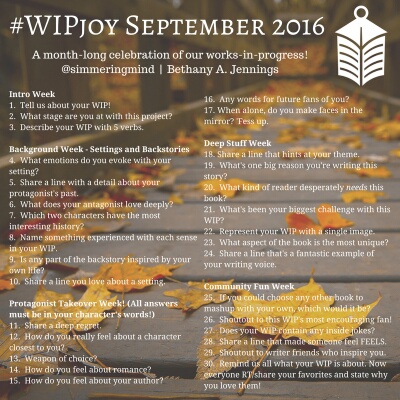 As I pondered these two seemingly separate things on my drive to work this morning they merged into one. I suddenly realized that the novel I’m working on involves a great deal of music. My main character, after all, is a bard. Music is his life.

It occurred to me that this character’s story line is the primary melody of my novel. It is his conflict with the main antagonist that provides the basis for the entire story. At the same time, there are several other supporting characters on both sides of the “good vs. evil” line. These, I decided are the harmonies. They support and compliment the melody line.

I am suddenly excited again about this new revelation I’ve discovered about this novel in progress. This one has been a long time in coming and it deserves to be completed. Let’s make some music!